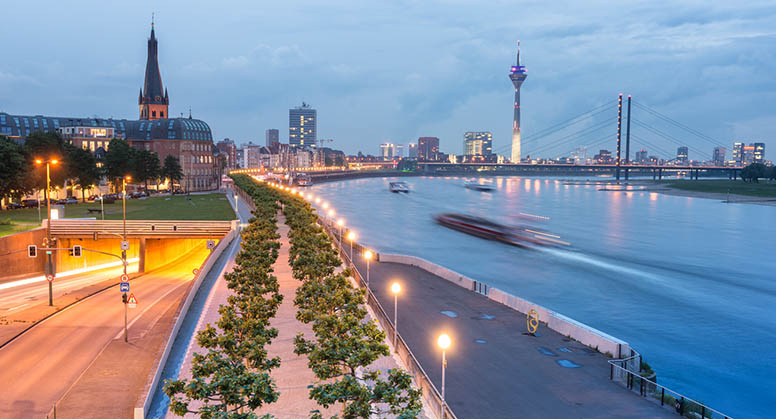 North Rhine-Westphalia is Germany’s most important economic region, and has for years been a popular location for foreign companies setting up a base in Europe.

Within North Rhine-Westphalia (NRW) beats the heart of the German economy. The state, which is conveniently situated in Europe’s core, offers investors a location from which they can grow their business. With 17.9 million inhabitants, NRW is the most populous of Germany’s 16 federal states. It also generates more than 20 percent of the total German GDP. Around 160 million people live within 500km of the state capital Düsseldorf – almost one third of all EU consumers. From no other location in Europe can so many people with high purchasing power be reached within such short distances.

NRW is home to large international industrial corporations, as well as dozens of smaller companies that are leaders in their respective fields. One out of four German market leaders from all economic sectors comes from NRW. Of Germany’s 50 highest-grossing companies, 20 are headquartered in the state: these include Bayer, Bertelsmann, Deutsche Post, Deutsche Telekom, E.ON, Henkel and Thyssenkrupp.

Not only does NRW produce some of Germany’s most successful businesses, but it also attracts foreign investors. In 2016, the state was responsible for the largest share of Germany’s foreign direct investment (FDI), making up 26.1 percent of total FDI for that year. Today, approximately 20,000 foreign companies are based on the Rhine and Ruhr rivers. Among them, 1,500 come from the UK, meaning 22.1 percent of all British firms operating in Germany have made a home for themselves in NRW. UK cosmetics manufacturer Lush opened its production facility in Düsseldorf in June 2016, a move that marked the company’s biggest investment on the European mainland. Meanwhile, telecommunications provider Vodafone manages more than just its German business from Düsseldorf: it also operates the company’s Vodafone Innovation Park, where new technologies and services are developed.

NRW’s excellent infrastructure is a key reason for its popularity with businesses. It boasts integrated transport with the Rhine, as well as with Europe’s largest inland port at Duisburg, six airports and the densest motorway and rail network in Germany. Further, with more than 110 technology centres and non-university research institutes present in the region, NRW offers an outstanding network for technology transfer. A further 772,000 students at 70 universities ensure that companies from all industries can find qualified employees, particularly in the digital economy.

The state has put everything in place to become a leading location for businesses looking to settle in Germany. Today, NRW is ahead of Berlin and all other German regions in terms of the number of digital start-up companies it accommodates. Additionally, NRW’s economy is taking major steps towards digitalisation along the entire value-added chain, offering excellent market and partnering opportunities for digital companies.

State-owned economic development agency NRW.INVEST supports international companies as they set up and grow in NRW. The company provides comprehensive information on property, recruitment, tax and legal requirements. Besides its head office in Düsseldorf and subsidiaries in Japan and the US, NRW.INVEST operates branch offices in China, India, Israel, South Korea, Poland, Russia, Turkey and the UK.

Investix team went to Dresden to celebrate the traditional Richtfest…

Investment during COVID. Can you invest in German property online?

Is it possible to invest in German property online? Only…

Dear investors, shareholders and partners of Investix Germany, We hope…

Register now to gain access to:
Why should I register?
By registering you are allowing us to use your personal data solely for the purpose of this request as outlined above. You may revoke permission any time and request your data to be deleted. For more information please read our Privacy Policy.

Continue
You will be redirected in

Enter your email below and we’ll send you a link to reset your password.

The link you clicked on to reset your password has expired.

Get your Investment Guide now!